A British Style Renovated Apartment in the heart of New York

This stunning apartment located in one of the most wanted areas in New York was renovated by the interior designer Rachel Chudley. Jessica Kayll, a London-based womenswear designer, and her partner Mark Fisch, a New York real estate developer, idealized their new stateside home interior design project alongside Chudley.

With the pandemic, Chudley conjured a ‘modernist baroque’ tableau of texture, color, and soul. This Upper East Side apartment was the first overseas distance project that the designer embraced, having been there only once, even before the apartment started to gain forms, only with moving boxes. However with an extraordinary architectural charm.

The apartment was constructed in the ’80s, so its lack of classic detail is considerably notable. In spite of that, Chudley says, «The most insane views ever.». The renovated apartment views are breathtaking and replace any lack of details.

The 21st floor has a colossal vantage, and it’s undoubtedly above the standards. The perfect merge between both worlds – you can have the breathtaking view experience of the Central Park‘s verdant plain on one side and with an eye roll distance to the other side, the typical intensity and urbanism of New York’s skyline – a dreamy panorama.

«Jessica and Mark both have a real love for dramatic design» Chudely affirms. Hence, although the designer’s objective was to take the maximum potential of the marvelous movie taken view scenes, a minimalistic interior design project was not above the table. The designer considered the couple’s design taste and did an extremely personalized customization. Chudley looked up for their penchant for spectacle, for Kayll, her kimono-inspired silk robes flourish with hand-painted florals, meanwhile, Fisch, his passion for Metropolitan Museum of Art and its interest in Old Masters painting, being a renowned collector of it. With this being done, the designer’s primary mission was to celebrate and make justice of the vistas in perspective-bending ways for the functionality or flair.

Kayll says, «I’m really drawn to color and things that are old and expressive». «I absolutely love that each room now has its own distinct personality» Considering this, to set a theatrical vibe in the remodeled apartment, Chudley chose a 17th-century-style pearlescent trompe l’oeil grand drape wallpaper to provide movement, volume, clarity, and shadow to the apartments entrance. Chudley thought, “The idea is that when you come through the front door, the curtain rises on the beautiful view of Central Park from across the living room,”

In order to the living room’s west-facing sunlight windows would diffuse throughout the space in a more wide form, Chudley decided to turn the ceiling into a extra glossy lilac-gray paint. This hue also features the strong shapes in the room, reflexing its shadows in the renovated apartment surfaces.

To have a relaxing time surrounded by the ceilings reflex shapes, she added a yellow touch to the Magnifique renovated apartment living room. Her choice was a soothing custom sofa in sunny velvet and a cozy pair of shearling white chairs with wood details which are inviting furniture to gather beneath the perplexing ceiling.  Chudley also added a bar cabinet with a silhouette that recalls the New York City rooftops.

For the couple’s office, the interior designer chose a velvety surface in a winery tone. This choice was not only for the aesthetics because this heavy textile is not only insulating but also sound-dampening.

Chudley added a pair of pudgy chairs in the same yellow tone in this renovated apartment area, giving continuity to the living. Fisch’s Old Masters paintings are also a vital element on these walls.

The dining room was inspired by the sky. To extend the exterior skyview into the space, Chudley went for baby blue colors and textures. “I wanted to extend the sky as far as it would go into the room,” . She added movement making a great fit between the all-over celestial paint hue and the marble on the dining table with its baroque-style stone base, adding a gloriously effect.

In this line of thought, the ceiling’s textured covering delivers a perception of a wild yonder spun with clouds, continuing the dining room theme.

Chudley referenced the sky, aligning the ‘there’s no limit’ motivation with the fact that the renovated apartment is a 1,600-square-foot rental with contractual limitations, but with all the aesthetic and sentimental atmosphere that the space deserves.

Chudley’s evidenced the “modernist baroque” vision for this renovated apartment by adding this is especially evident in this exquisite entryway 17th-century Italian mirror’s with gold finishing, making a great combo with the picturesque wallpaper.

Like the rest of the renovated apartment, the bathroom was not forgotten and has its own uniqueness. With tones of bronze and brown, the reflection of the trompe l’oeil drape wallpaper in the mirror adds drama and singularity.

Lastly, the primary bedroom is in pale pink tones, making reference to a sunset hue. Chudley wanted to add distinction detail to this renovated apartment area, so the choice was this wonderful antique vanity that adds a grounding element to a space.

The gold-framed mirrors and paintings echo a similarly reflective moment, giving continuity to the living room When decorating the house, we pay attention to every detail. All the furniture and accessories need to feel comfortable and look stunning.... Read more 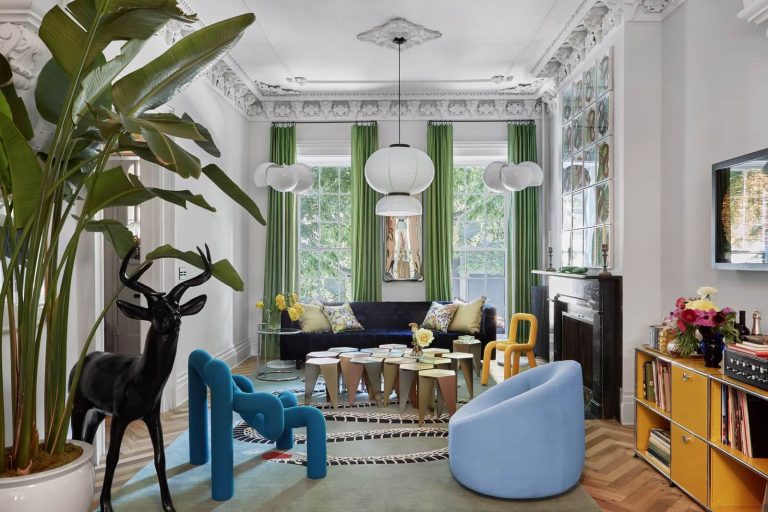 Designing homes for others is a job. For interior designer Fawn Galli, designing her bohemian home in Brooklyn downtown was a... Read more The very stylish Belgian-born, Dirk Jan Kinet, has experienced life as a nomad, moving from Italy, Portugal, and Turkey before settling in... Read more 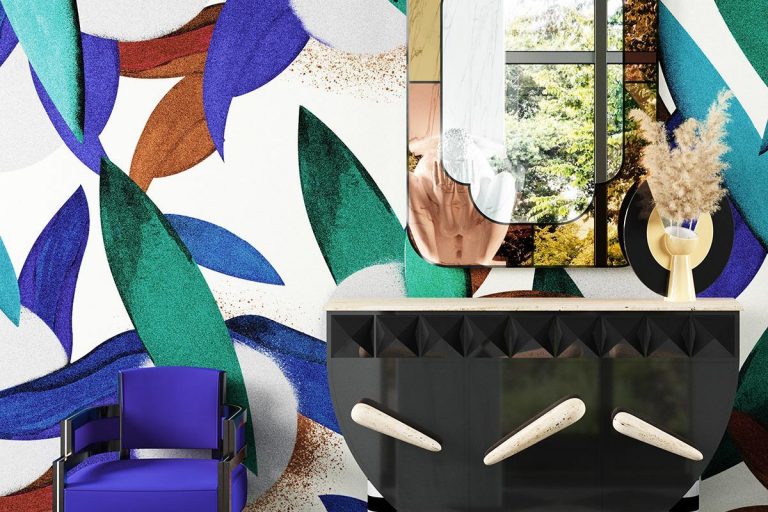 Sideboards. Buffets. Cabinets. Storage furniture is the greatest interior design hardware. Either it is a small home or a big property,... Read more 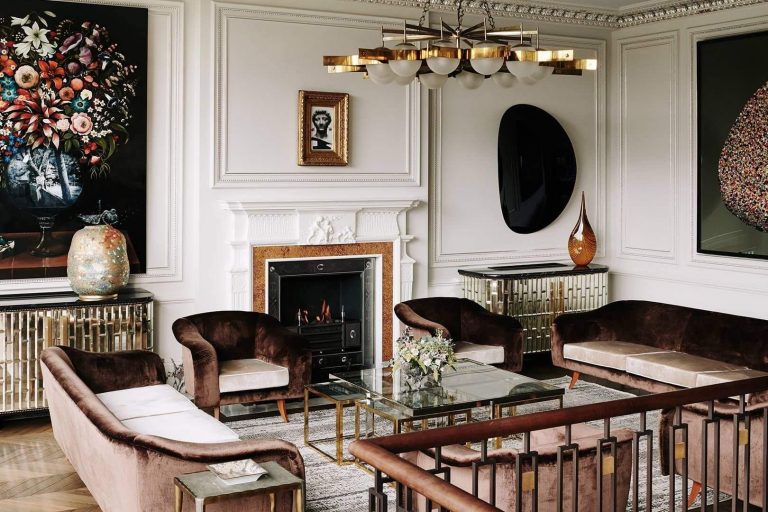 Interior designer Shalini Misra opened the doors of her elegant home, in London, and gave a tour. The designer, along with skilled... Read more 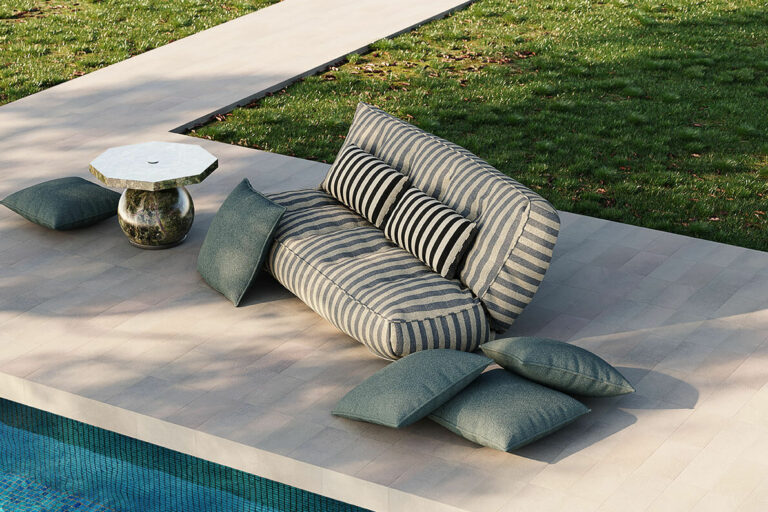